As a mom, I’ve always thought my daughter was the coolest kid on the planet. But when we took our toe-headed toddler to the lesser-traveled region of eastern Guatemala, I realized I may actually be right. While we were in Belize, we made the trek into Guatemala to visit the ancient Mayan ruins of Tikal. Tikal is a UNESCO World Heritage site and is considered the Mecca of all Mayan cities. Skipping it would be like visiting Paris and not going to the Eiffel Tower. No sooner than we crossed the border into Guatemala did I notice people taking an interest in our tiny traveler. Not a creepy interest (believe me, moms have creeper radar, and it wasn’t creepy), it was just a genuine interest in our bubbly, blonde baby. Locals would come up to talk to our daughter, smile at her, and even ask us if they could take her picture. 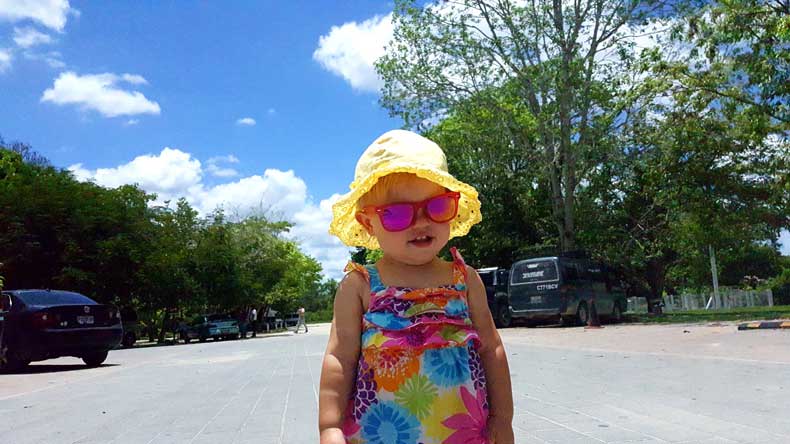 The further we journeyed into the country the more apparent our daughter’s growing stardom became.

Once we got to Tikal it was lunch time. We decided to stop and eat before exploring the park. Soon after we sat down, our waiter, who spoke only Spanish, came up to us. But he wasn’t asking for our order. Instead, he asked if he could hold our toddler and take a picture with her. Many parents would probably be a bit hesitant, but we weren’t. (Maybe we aren’t as over-protective as I’ve have claimed to be in the past.) The waiter was nice, friendly, and we had spoken with him for a few minutes already. Besides, the one room restaurant was small so the waiter couldn’t venture more than a few steps away from us. 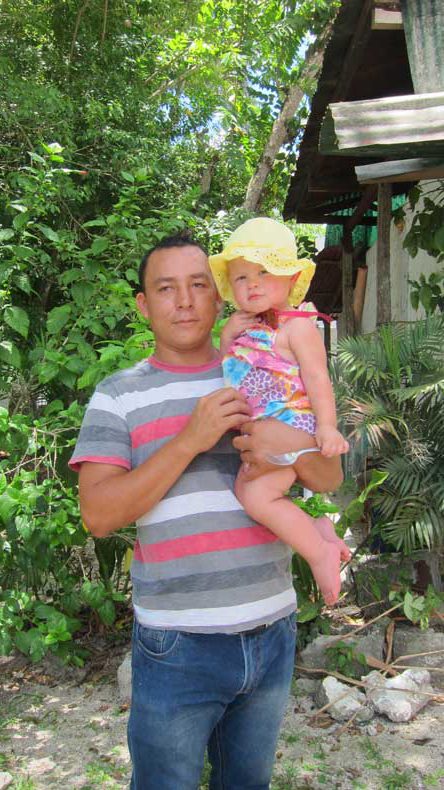 We would never force our child to let someone hold her if she felt uncomfortable. Luckily, if she doesn’t like someone, she unashamedly lets us know with an ear-drum shattering scream. With our friendly waiter, she did none of that. Instead she giggled and smiled at him. He walked her around the restaurant pointing out different objects and naming them in Spanish. The two were practically besties by the time our food arrived. They took a few pictures together and he proudly introduced his new, pint-sized friend to his co-workers, who also cooed, smiled and talked to her like she was the royal baby.

A couple hours after we ate, we had to return to the restaurant to find our daughter’s shoes which she loves to take off as soon as I put them on her feet. (Seriously, why can’t toddlers keep their dang shoes on?!) When we went in to ask the staff if they had seen any baby sandals lying around, our waiter came over to greet us once again. As I was explaining what the lost sandals looked like to another restaurant employee, our waiter pulled out his phone to show her a picture of Avery’s shoes.

But he didn’t have to open his photo gallery to do so. He had already changed the wallpaper on his phone to the picture of him and our toddler! Don’t get me wrong, I love kids, but never once have I considered using a random kid’s picture as my wallpaper image. Again, this would typically seem creepy… but for some reason, it just didn’t.

We experienced a similar situation when we went to Costa Rica in 2015. Everywhere we went our waiters would offer to hold Avery for us while we ate. She was only 6 months old, and high chairs are not as common in Central America as they are in the states. So perhaps that experience prepared us for this one. But it definitely didn’t prepare us for the paparazzi storm that soon followed. 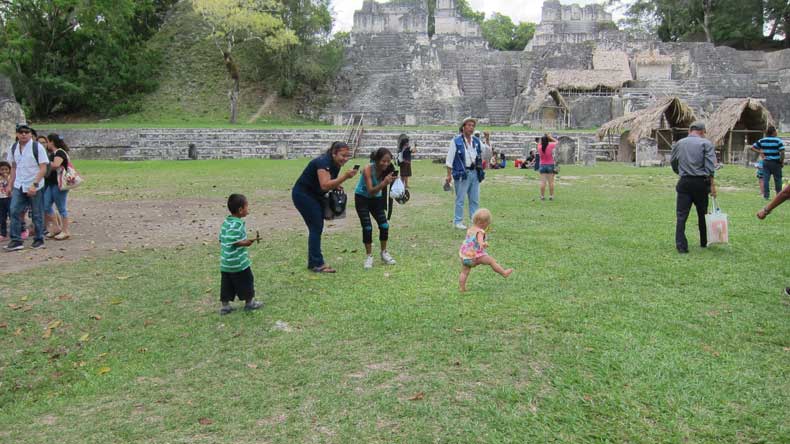 As we approached the Grand Plaza at the center of the ancient city of Tikal, our daughter’s fan base grew exponentially.

While I chased her around the plaza trying to get pictures of my curious 16-month-old next to the 3,000 year old pyramids, a group of school girls on a field trip walked by. Instantly, our little tourist became the tourist attraction. The teenagers and even the teachers flocked to our toddler, cameras in hand, surrounding her in a cloud of camera flashes, oohs and awws. 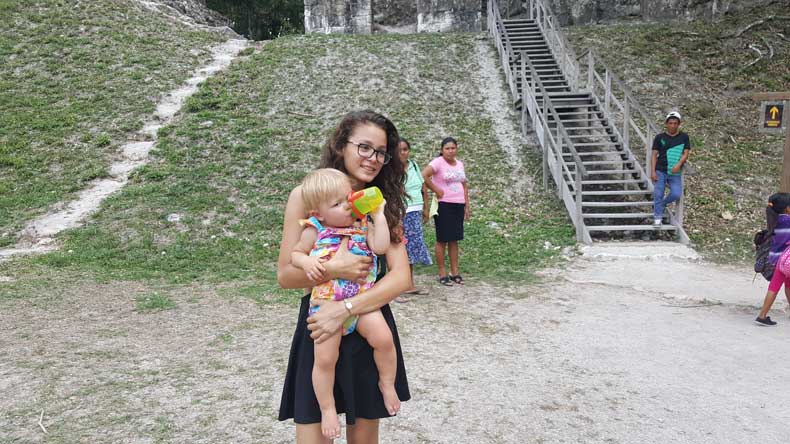 My husband and I looked at each other in wonderment as we watched our baby go from a typical Oklahoma kid to an A-list Guatemalan celebrity. We may have been taken aback by the crowd of onlookers but Avery handled it like a pro. She was seemingly oblivious to the extra attention. She loves the camera and obligingly smiled for pictures. Well, most of them. She comes by it honest, I guess, having a father and a mother (at one time) who made a living in front of the camera.

Why a blonde baby may attract more attention abroad

In reality, our daughter is probably one of the first white, blonde-haired babies who her Central American admirers had ever seen in person. When you think about it, this particular region of Guatemala isn’t a major tourist destination yet. Those who do visit this amazing country usually stick to Antigua, which is located on the opposite side of the country. And those who do make the trek to Tikal, aren’t typically doing so with a toddler. Many of the Guatemalans we talked to have never left the country. Those who have traveled usually haven’t gone to places like the United States, Canada, or Europe where fair skin and blonde hair are common traits. While we were there, we were told that the United States or Europe is not affordable for them to visit and also requires a visa that is difficult to obtain.

So to them, Avery was unique and unusual. It would be like seeing a giraffe wandering around the streets of New York. You know they exist, but they aren’t native to New York, so seeing one roaming the streets would be an unusual sight. You’d probably want to snap a picture too.

I realized something really cool from this experience. We like to travel to expose our daughter to other cultures and new experiences. But in doing so, we are also exposing other cultures to her.

7 comments on “Our tiny, blonde celebrity”

I really enjoy your posts Melissa

I love it! I was on the very small scale flip side of this when I saw my friends baby for the first time. Her mother is French Canadian/Egyptian and her father is full-blooded Tongan, and they were living in a non-tourist area of Hawaii. This baby was used to dark skinned, brown haired people. The look of wonderment on her 11-month-old face when she saw my blonde hair and blue eyes was priceless! LOL She climbed up in my lap, touched my face and hair, and proceeded to stare at me for the next hour! Did wonders for my self-esteem! ?

That is a beautiful story! I love it! Kids are so innocent and even a different hair color is magic and amazing to them.

Oh this is so cute! Love it!

Thank you! Her mother and the Guatemalans agree with you. ☺️

I loved the last line, experiences like this would really make you stop and think!