It’s an ongoing debate that seems to ignite every time there is an incident involving an animal at a zoo. Should zoos be banned? On one side of the argument there are those who say wild animals should not be kept in captivity. On the other side there are those who argue zoos serve an important, educational purpose. 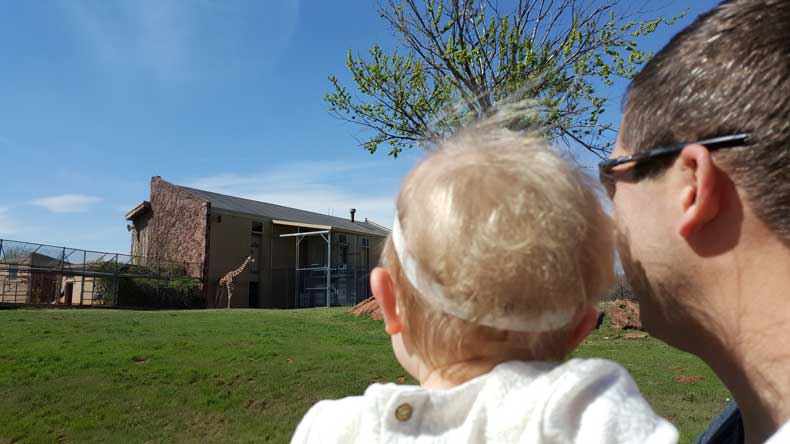 The last incident that sparked this debate happened in May 2016 at the Cincinnati Zoo. A 4-year-old boy crawled over the railing and fell into the gorilla enclosure. Zoo officials shot and killed the 17-year-old endangered silverback gorilla that approached the boy. At times the gorilla appeared to be guarding the child, but at other times the 400-pound animal was seen on video dragging him across the enclosure, while onlookers screamed.

Before I give my opinion on the topic of banning zoos, let me first say something about this particular incident. Critics are obviously blaming the child’s mother for the death of this gorilla. I will not. Should she have been watching her child better?  Yes. Absolutely. But as the mother of a curious, climbing toddler, I know how quickly things can happen. If I take my eyes off my daughter for even two seconds I feel like she’s getting into mischief. I think there is enough mommy shaming in our world without me adding to it. So there’s that.

Should the Cincinnati Zoo officials have shot the gorilla? Probably not. There may have been a better way to handle it, but let’s keep in mind this was a 400 pound gorilla versus a small child… a toddler. A TINY HUMAN. Would people have actually rather seen this 4-year-old boy accidentally harmed or killed as opposed to the gorilla? If you read media reports, it kind of seems that way. Don’t get me wrong, I HATE to see bad things happen to innocent animals, but if this had been my child I would have wanted officials to save my baby’s life at all cost. Sorry gorilla, but I would have shot you myself if it was either your life or my child’s.

Now to my original question… should zoos be banned?

Should zoos be banned?

I personally am not a huge fan of zoos. I love animal sanctuaries that mimic the natural habitats and give animals the appropriate room to roam. But zoos on the other hand are there for our entertainment, not the safety of endangered animals or the proliferation of a species. Every time I walk by an elephant exhibit at a zoo and see these beautiful, large creatures kept in an area that I feel is way too small, it makes me sad. I want them to have large, open pastures to roam freely. They deserve many, many acres, if not square miles to roam about. The same goes for lions, cheetahs, and other species that need room to run… I mean, really run.

If zoos did not exist

I also think if zoos did not exist it might encourage more families to travel. Perhaps tourism in Africa and other areas of the world would see a boost in tourism if more families visited those places to learn about animals that they otherwise would in a zoo. Lord knows some of these African countries could use a boost in tourism dollars coming in.

Why we go to the zoo

We plan to take our daughter on an African safari when she is old enough to truly understand and appreciate it. We want it to be a learning experience for her. But in the meantime, guess where we take her: the zoo in our hometown of Oklahoma City. She’s been to the zoo several times in her short life and will likely go a lot more. She loves it, and she’s so curious about the animals. Zoos foster a love for animals in children. I have a friend whose daughter is obsessed with giraffes. She can tell you everything there is to know about giraffes. Why? Because she got to feed one at the zoo a few years ago, and ever since she has loved them and wanted to learn about them. Children learn so much about the different animals that they see in a zoo, which fosters a love for learning as well.

On that same note, traveling is expensive. Not every family can afford to take their children to Africa to learn about elephants, giraffes, lions and other animals native to the continent. As a family, we prioritize travel and trim expenses elsewhere to be able to afford to do so. I realize that international travel with children is not necessarily the norm, though. Even those who could afford to do so probably would not because they don’t want to deal with the stress and burden of a long flight with a toddler. The zoo is a much more affordable and realistic option. One that provides all children the opportunity to learn about the earth’s amazing creatures firsthand.

To Ban or not to ban?

So should zoos should be banned? My short answer, no. But I do believe there should be changes made to ensure the safety and protection of both the animals and zoo visitors. What happened at the Cincinnati Zoo is rare. I think most zoos do a very good job at providing adequate safety measures to protect the public. Where I think zoos could do a vastly better job is in providing adequate and ethical provisions for the animals so that they can roam freely in a more open habitat similar to their native land.

What do you think? Should zoos be banned? We are open to respectful debate and embrace all opinions. Leave us a comment and let us know your thoughts.

5 comments on “The great zoo debate – Should zoos be banned?”

Thank you. It’s such a hot button topic right now, I figured I’d weigh in.

Yeah so true. Especially with the gorrilia that was shot

Well put. It bothers me that the mother is being so ferociously attacked..we all know how much can change in an instant with toddlers. I feel for the gorilla, but so happy for the family that the boy was saved.

Totally agree. We all make mistakes as parents, and you can bet that was the worst day of that mom’s life.