To say life in Belize and Guatemala is different than it is in the United States would be somewhat of an understatement. The USA may share the same continent as these two countries, but that’s basically where the similarities end. Life moves at a slower pace in this part of Central America. The local economies are somewhat primitive and significantly behind when it comes to technology. In fact, much of Central America is very poor. In Belize and Guatemala, several generations may share a small household. And many of the women stay at home in the villages and raise children while the men work. Driving across Belize and Guatemala, you won’t see fancy buildings, shopping centers, or fast food chains. But what you will see is Belizean and Guatemalan culture at its purest. 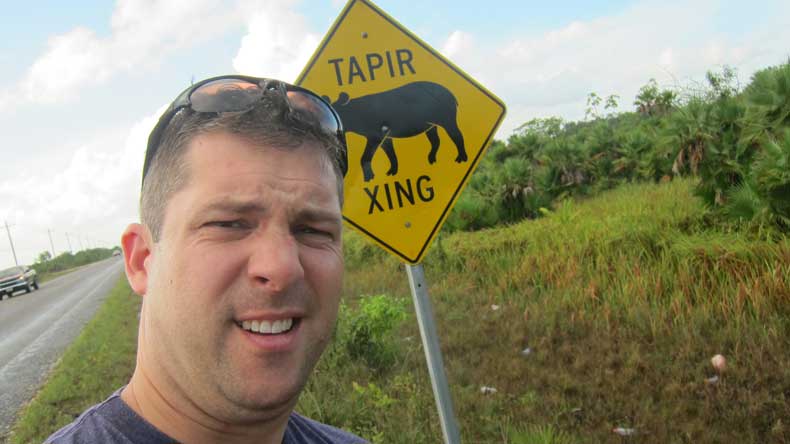 Belizean and Guatemalan culture: Simpler life at a slower pace

Many of the people in these two countries, particularly outside of the major capitals of Belize City or Guatemala City, raise their own livestock and chickens. They also kill their own livestock and chickens when it’s time to eat. While visiting a small village in Guatemala, we saw an old woman plucking the feathers from a chicken whose neck she just snapped along the side of the road. That imagery is quite a contrast from what you typically see driving down the road in the United States. The different way of life may result in culture shock for some, but I found a unique beauty in this old-fashioned lifestyle and the Belizean and Guatemalan culture, in general.

Still, there were a few things I saw while on our Belize family vacation that also took us into Guatemala that struck me as… well…weird. 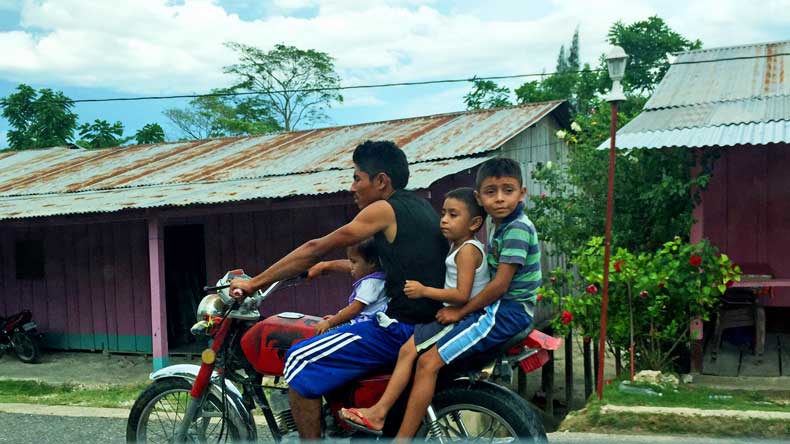 In the United States, children are in car seats until they are practically pre-teens. For the two years, they ride in rear-facing car seats, then transition to forward facing seats, and finally booster seats when they reach a certain age or size. But in Guatemala particularly, there are no car seat or seat belt laws. Apparently there are also no laws about babies or squirmy toddlers riding on motorcycles.

Many people in both Guatemala and Belize ride a motorcycle in lieu of driving a car because gas is so expensive there. (Gas costs more than double what we pay in the USA.) That means if a family wants to go into town for something, they either ride the bus, walk a great distance, or take the more convenient option: the whole family hops on the motorcycle together. And I mean the WHOLE family. We saw infants and toddlers riding on motorcycles… Families of three or four riding on motorcycles. In fact, hardly ever did we see just one person on a motorcycle at a time. And not once did we see anyone wearing helmets, not even the children.

Children Playing in the Highway 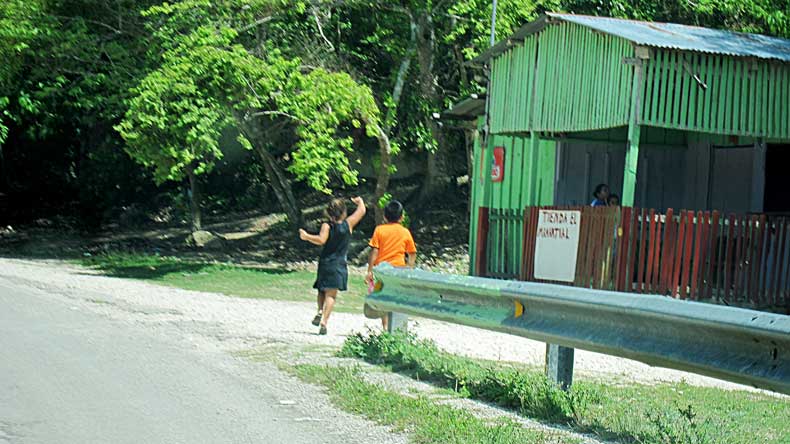 Maybe I’m a helicopter mom. I will admit I am a bit over-protective of our daughter. But if the non-helmet-wearing babies on motorcycles don’t weird you out, the kids playing in the street might. Whether it’s a rural, unpaved road, a street through a decent-size town, or the stinkin’ highway on the way from San Ignacio to Tikal, children who look as young as four years old are playing, walking, or crossing the street ALONE. OK, their highways are still only two lane roads so we aren’t talking about major interstates like we have in the US, but I digress.

Kids in Guatemala and Belize are allowed to roam free like adorable little gangs made up entirely of tiny people. Moments before I snapped the picture above, those two kids who look to be about 7 years old were running along the narrow highway through Guatemala.

I found it bizarre how much independence children have there and how much trust their parents must have in their kids and in others to let them roam the streets alone. Meanwhile, my kid won’t be able to play alone in the driveway of our house until she is at least 10… OK, maybe 12.

Farm Animals Grazing on the Side of the Road 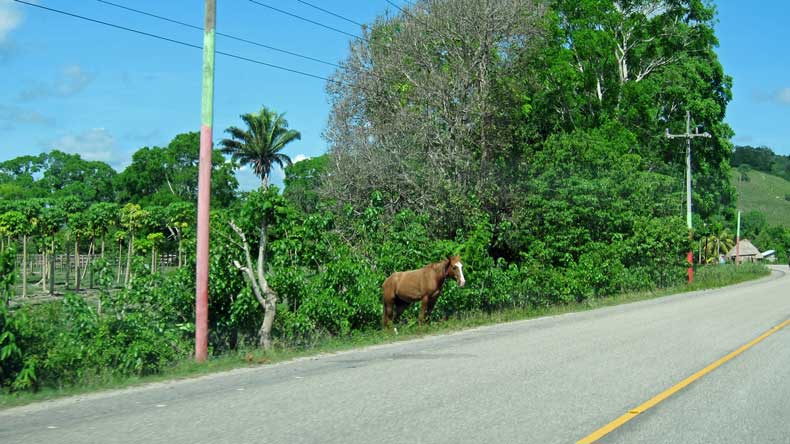 Speaking of things you see on the side of the road in Belize and Guatemala… It isn’t just children. It’s the whole family farm! We barely got a couple of miles outside of the airport before we saw a horse tied up on the side of the road eating grass along the shoulder. I thought it was odd, but we kept driving. Finally, about 80 horses later, I started questioning it. 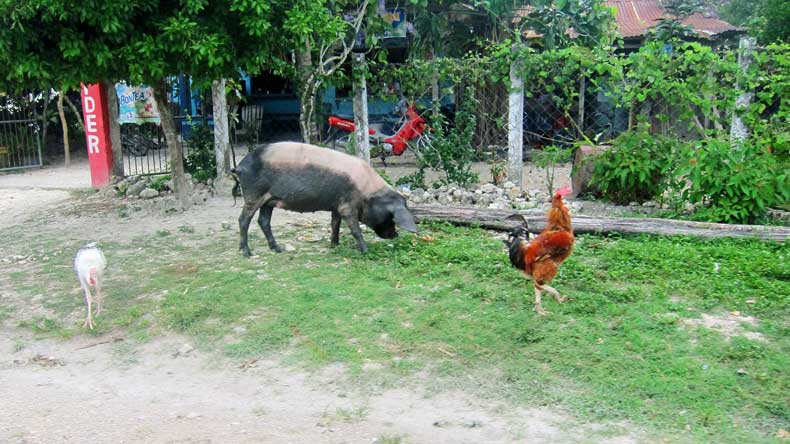 In the states, not many people own horses, and those who do keep them secured on a ranch, fenced in, and in a space large enough to roam and graze freely. If I did own a horse, I’d be afraid someone would steal it or hit it if I left it tied up on the highway to graze on the tall grass. But in Belize and Guatemala, this is a common practice. The horses eat the tall grass along the side of the road that would typically be mowed down. They don’t have lawn mowers there, they have livestock.

And it isn’t just horses you’ll see grazing along the roadside. Pigs, chickens, and sheep were also allowed outside the confines of a fence. In fact, on several occasions the animals would break free from their leash and wander in the middle of the highway.Totally normal there. 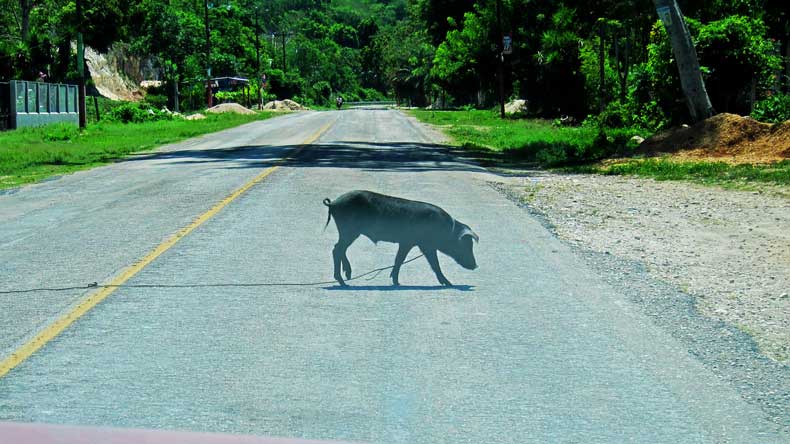 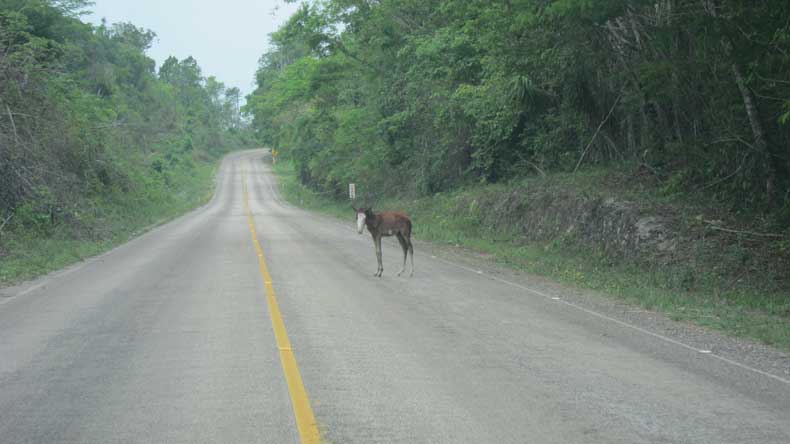 The American culture can be a bit closed off. We move out of our parents’ house immediately after high school. Often, we relocate to different cities if not different states. We have garages, and each evening after work we pull into our garages, close them, and never see our neighbors. In fact, most of our neighbors keep their blinds closed all day. Many of us have never actually met our neighbors. It doesn’t mean Americans aren’t friendly. It’s just the way of life here in the United States. We keep to ourselves.

That is not the case in Belize or Guatemala. The culture in Belize and Guatemala is more community-oriented. Neighbors are practically family. They sit outside all day together, talking, sharing meals, and trying to stay cool since air-conditioning is rare and it is hot as the surface of the sun there! 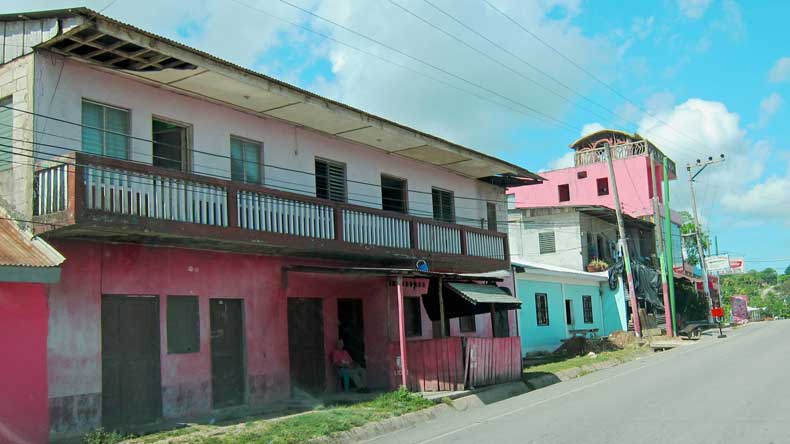 Everywhere you go, whether in the popular Central America destinations and towns like San Ignacio, the islands like Ambergris Caye, or in small villages with only a few homes, you will see people sitting outside on their porches, or hanging out their windows to catch a breeze. It would be hard not to get to know your neighbors in this scenario. I really liked this about the Belizean and Guatemalan culture. When you think about it, this is probably the reason children can roam the streets freely and why they don’t have to worry about their livestock getting stolen. Everyone knows each other, and they look out for each other. This may be weird to Americans, but I think we could stand to learn a thing or two from the Belizean and Guatemalan culture in this particular aspect.

Maybe Americans are actually the weird ones.

Have you been to this part of Central America? What stood out to you about the Belizean or Guatemalan culture? Leave your thoughts in the comments below!

I think you may be onto something here when you say maybe folks from the US are the strange ones… I think more cultures around the world live like folks in Belize and Guatemala than we do in the US, which is not always a bad thing! Many of these practices are necessity or a reflection of the poverty in which folks live. I find observing people’s daily lives in new places fascinating – thanks for sharing.

Very true! I have a friend who moved to Central America. She said at first it was a big culture shock adjusting to life without all her stuff and the modern conveniences she had in the states. But after a few months there, she said she forgot what stuff she actually missed.

I’ve been wanting to visit this part of the world. Its nice to experience in the differences in places away from home. Babies on motorcycles are also seen like that in Vietnam.

We are considering a trip to Vietnam in August 2017, so thanks for preparing me for the motorcycle-riding babies there, too! It’s amazing how commonplace that is in so many other countries, yet in the state I live in, children have to be in a rear-facing carseat until 2… and in some form of car seat or booster until they are practically a teenager. lol.

That’s what is so great about travel, seeing different ways of living. Although, coming from Montana, I have seen plenty of cows and horses on the road (elk, bison, and deer, too)! And we have plenty of friends who butcher their own chickens and cows…maybe its a rural living thing. No babies on motorcycles, though!

It probably is a rural living thing. I’m going to Montana for the first time in a month. I’ll look for the cows, although it will quite cold while I’m there so they may not out. 🙂

Yup, we saw all this all over Central America but also SE Asia! Families are known to share a scooter together, and my favorite was a family of 5 with a baby and everyone but the baby was wearing a helmet! It’s amazing that they survive childhood.

Every time we saw a scooter or motorcycle approaching us, we played a little game called “guess how many people are on that scooter.” We saw one woman who had a toddler on each leg while driving a small motorcycle. Crazy.

It is great that you get to see the “real” side of the Belize/Guatemala culture (as compared to the touristy side)! Animals roaming around and people on the highway reminds me of what we saw in the Philippines 🙂

I agree! We spent a few days in the touristy parts of Belize and the rest of the time exploring the rest of the country and Guatemala. It is a night-and-day difference! I loved it though! It was charming in it’s own unique way.