What a long flight with a toddler is really like

How our first long flight with a toddler began

A blowout… Clear up the back and all over her clothes. That is how our toddler’s first long-haul flight from the United States to Europe officially started. Before we were even taxiing to the runway, our 18-month-old was stripped down to just a diaper. We had already gone through the awkward lavatory diaper change and attempted to clean her onesie in the sink. Anyone who has ever done a long flight with a toddler knows it’s stressful. But this was practically a laughable start to an eight hour plane ride.

Crap… That’s what was all over our toddler, our arms, and probably the lavatory after we were finished with the diaper change. It is also pretty descriptive of how the rest of the flight went.

Meltdown… Only one hour into the flight and our half naked baby had already had enough. We walked her up and down the aisles. Stood in the galley and bounced her and sang lullabies until we were just making up words. We watched stressfully as people looked us up and down when we passed… Some probably annoyed, others sympathetic, and still others likely just wondering why the heck our screaming baby had no clothes on.

A moment of silence 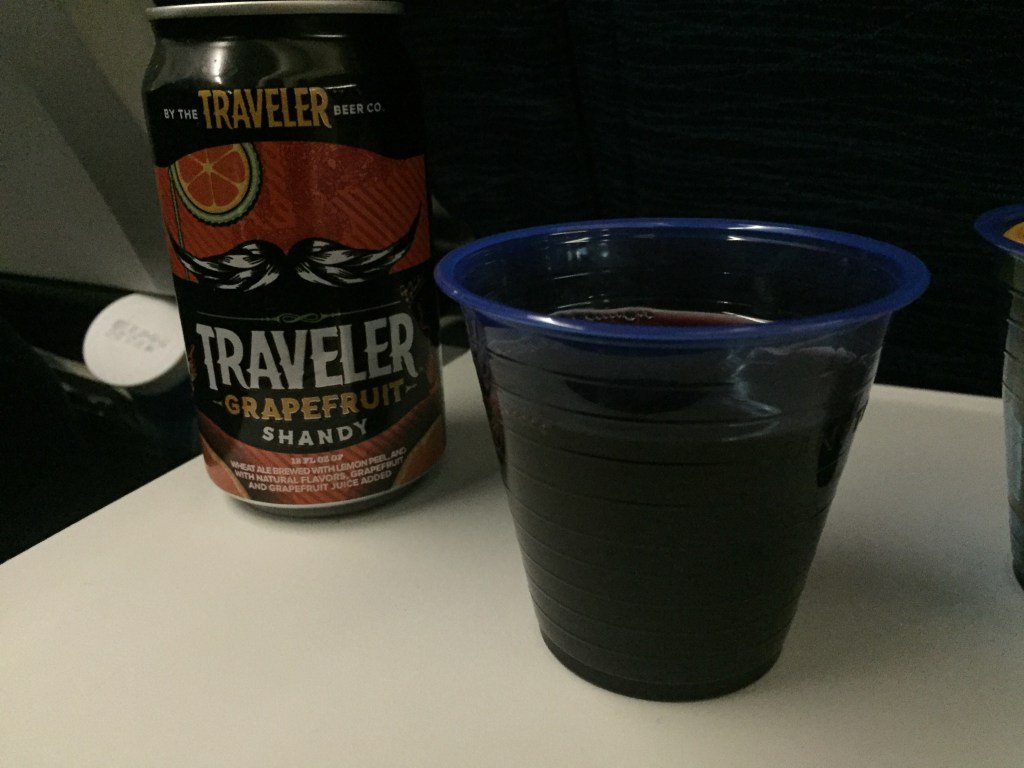 Cabernet… Our adorable naked cherub finally fell asleep and before meal service at that! My husband and I sat in our seats proud of ourselves for getting the kid to sleep. I smugly watched a movie mentally patting myself on the back and enjoyed a glass of red wine. My husband sat next to me doing the same with a beer and his own set of headphones. Both of us were thankful for the individual TVs in each seat back and felt satisfied with our movie selections. My husband smiled gleefully watching chick flicks without fear of ridicule or teasing while I chose a more serious Academy award contender.

One movie turned to another… Next, the mom in me opted for something lighthearted from the kid’s section: Zootopia. My husband unsurprisingly selected yet another chick flick: The Notebook, which he’d already seen a dozen times before. One plastic cup of wine also turned to another. My frazzled nerves calmed with each small sip. Only six more hours to go.

With each passing hour I started to feel more relieved… Or maybe it was with each passing plastic cup of wine the dopamine induced happiness began to come over me. Just a few short hours earlier I was rubbing my temples as my daughter and I were both practically in tears. But after four hours of silence and two glasses of wine I started to think I could do another long flight with a toddler someday. I had this down! Who cares that my kid was only in a diaper… Who cares that all she had for dinner were a few McDonald’s fries and some bites of chemically-processed meat from my hamburger. She was sleeping. I win.

Maybe next year, we could do an even longer flight. Yep, it was settled. I decided to start planning a trip to Asia next year. I’d practically be a pro at surviving a long flight with a toddler by then. 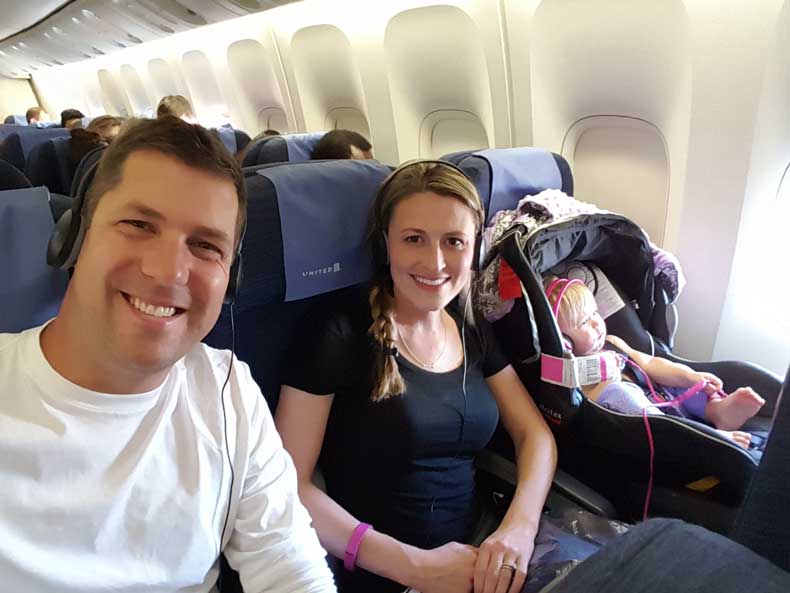 Back to reality with one small word

“Mama”… The sound of my daughter softly calling out for me still melts my heart… But on a crowded flight with two and a half hours to go, that sound might as well have been nails on a chalkboard. After only a four hour sleep on an overnight flight, our toddler roused from her slumber. For another 30 minutes we wrestled the beast, hoping she would surrender and go back to sleep. But the beast won. I started reconsidering that trip to Asia next year.

For the last two hours of the flight we desperately entertained our toddler. It was 1am back home, but the sun was coming up just outside of our little oval window. We saw land in the distance. Europe was in view! The end was in sight. The entire arsenal would be deployed during those last two hours to keep our tiny, still-tired toddler from disrupting the rest of the sleeping cabin. Videos, toys, snacks, milk, walks through the dark aisles. But it wouldn’t work.

The last 30 minutes of the flight might as well have been an eternity. The flight attendants served breakfast, the lights came on and most of the people on the flight were enjoying their croissant and yogurt… Except us.

Toddler tantrum… It was bound to happen. At home, we can’t get through an eight hour day without at least one tantrum, there was no way we could get through a full eight hours in an enclosed, cramped airplane cabin without one. And it happened. Man, did it happen! Our toddler kicked and screamed and when the kicking and screaming didn’t make the airplane immediately land so she could get off, she screamed even louder. When we tried distracting her with toys, she threw them. This was a fit right up there with her worst ones ever. It may have lasted only 5-10 minutes, but I’m fairly certain most of the plane’s passengers had a ringing in their ears when it was finished.

The only good thing about this fit of rage was that it happened while everyone was awake and the plane was already descending. I’m sure the ear popping from the descent just exasperated the already difficult time our exhausted toddler was experiencing. So we maintained our cool and made it through. By the time we landed our toddler was happy and smiling as if she hadn’t just turned into the possessed kid from The Exorcist a few seconds earlier.

Lessons learned from our first long flight with a toddler

Needless to say, the flight was a bit difficult, but we would definitely do it again.

In the grand scheme of life, even a horrible long flight with a toddler is only about 8 hours. Eight hours, however long it might feel, is ONLY eight hours. Now, the jet lag is another story. But in reality, our first long flight with a toddler wasn’t all bad. In fact, our teething, poop-covered toddler still slept for more than half of the flight. I’d say that is a success. 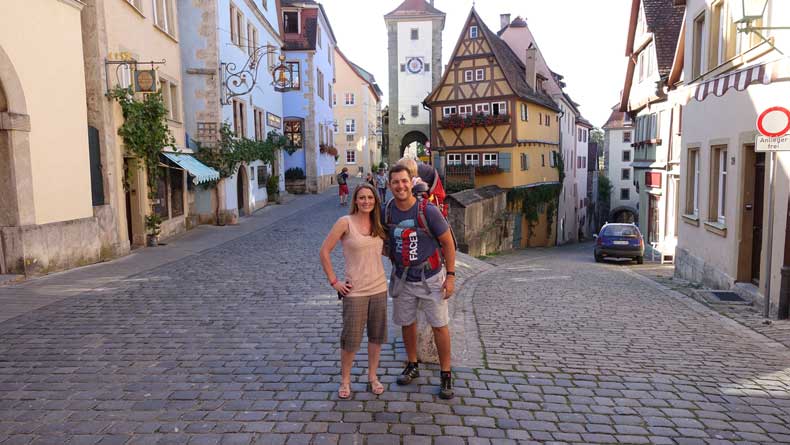 Finally when we arrived in Germany we were mentally and physically exhausted. We were jet lagged, and a bit dehydrated. But we were ready for adventure. And what an adventure it would be!

Planning a long flight with, or without, kids? Check out these tips to make time fly!