When I was a kid, growing up in New Mexico, I lived a somewhat sheltered life. I grew up in a stable family with loving parents and a sense of security that every child should feel.

In the small town where we lived, kids could freely ride their bikes around the neighborhood for hours, only returning home when the sun started to set. I’m sure our town had its fair share of problems. I’m sure there were robberies, burglaries, and other crimes, but my innocent self simply wasn’t privy to it.

My perspective of the world changed on April 19, 1995. That day will forever be etched into my mind. I was in the seventh grade. I remember getting out of school and walking home with my best friend, Sara, like I did every day. We went inside her house for an afternoon snack. Her mom was sitting at the kitchen table watching the news. They had a small television in their eat-in kitchen. By today’s standards that television would be bulky and antiquated, but at the time I thought it was so cool that they had a little TV in the kitchen. I remember the volume was much louder than it ordinarily would be, and Sara’s mom didn’t so much as glance up at us when we walked in.

She looked worried. Usually, she would ask about our day while making us a snack, and we would cheerfully fill her in on all of the seemingly relevant happenings at school. But that day was different. She didn’t ask us about school. She didn’t make us a snack. And when she finally looked up at us, I could see the concern in her eyes.

“Girls, something bad happened today,” she said at last. “There’s been a bombing.” We sat down at the kitchen table and she told us about the bombing at the Alfred P. Murrah Federal Building in Oklahoma City, Oklahoma. She told us that there were a lot of people killed including children. Sara and I sat with her mom at the kitchen table watching the small television as images of the building half blown away and firefighters digging in piles of rubble flashed across the screen.

It was the first time I realized that evil existed in the world.

As fate would have it, I left that small town where I was raised and eventually moved to the Oklahoma City area. I now live in a town called Moore. It’s a small suburb just on the outskirts of Oklahoma City. I’ve been to the Oklahoma City National Memorial many times. I take visitors there every time we have family or friends in town, too. 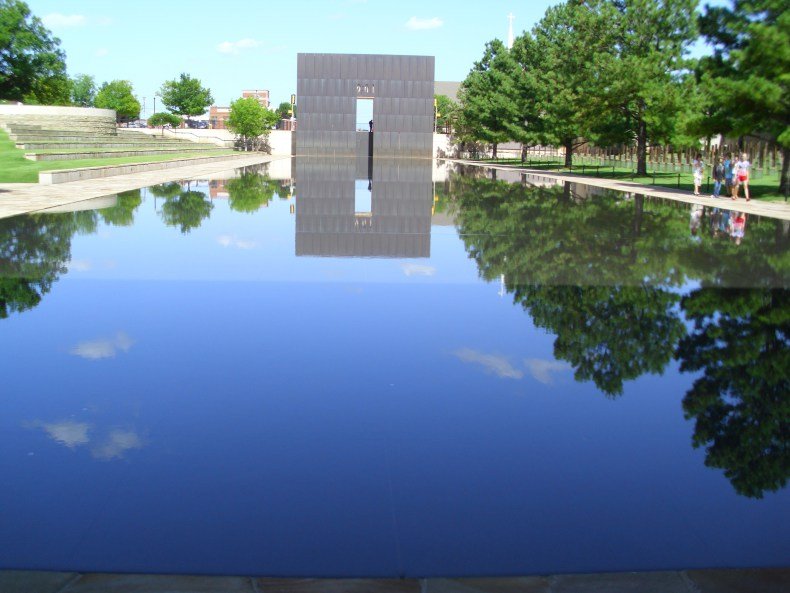 The memorial is actually quite beautiful. There is a shallow reflection pool that runs where the street used to. On each side of the pool, an archway stands. One archway reads 9:01, the other 9:03, one minute after the bomb exploded. In essence, it symbolizes how much can change in just minutes. Metal chairs, one for each of the victims, line a grassy area next to the reflection pool where the federal building used to stand. There are 19 smaller chairs that represent the 19 children who died in the day care center on the second floor. The museum is worth a tour, as well, if you are ever in Oklahoma City. Overall, it is very well done. 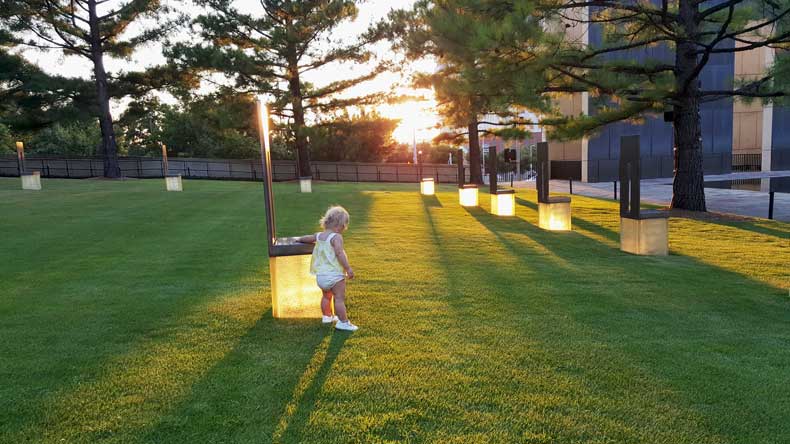 Today, people across our city, our state, and perhaps even our nation are remembering the anniversary of the Oklahoma City bombing. It’s a somber day. More than twenty years ago, 168 people were killed. Thousands of people lost someone they loved. A community, a nation, and a seventh grade girl were forever changed. Today, I mourn along with so many. 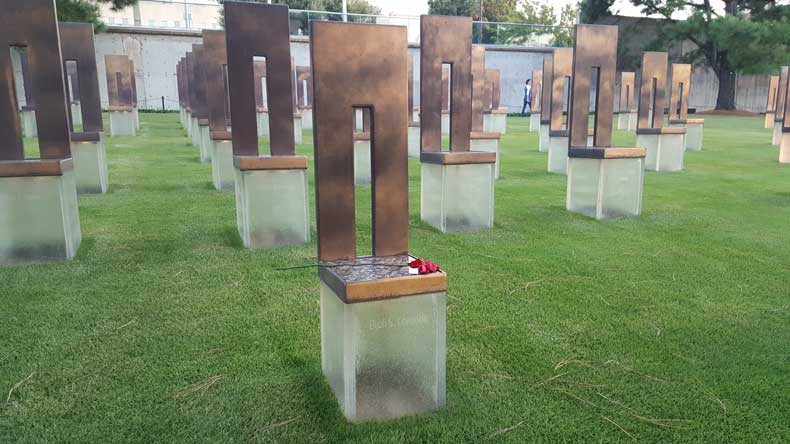 “We come here to remember those who were killed, those who survived and those changed forever. May all who leave here know the impact of violence. May this memorial offer comfort, strength, peace, hope and serenity.”

6 comments on “The Oklahoma City Bombing: the day that changed my perspective”

Like you, I can distinctly remember hearing about the Oklahoma City bombing. I was a freshman in college and had turned on the TV after class in my dorm room to see the devastation. I have not been to Oklahoma City yet, but plan to see the memorial there one day. My heart still goes out to the victims and their families. We shall never forget.

Thanks for sharing your story! It’s amazing how many people from across the country were impacted by that event and so vividly remember it.

My first visit to Oklahoma my good friend took me to the memorial. It was so beautiful yet I could feel the presence of so many lost souls there. I simply sat staring at the memorial with tears running down my face. I still can’t walk by it without feeling a chill and choking up with tears.

I agree 100% Suze. It’s a very moving memorial. Each time I tour the museum, I see something new for the first time, and I always leave with tears in my eyes and a heavy heart.

I was 6 years old when this happened and I’m not 100% sure if I remember seeing it on the news at the time, or if I saw those shocking images on tv a bit later. You know how sometimes memories can get a bit muddled? Either way, I remember hearing about children dying in the bombing when I was young and feeling so, so sad about it. The memorial looks very moving, I’ll have to visit one day.

Thanks for sharing your story! What’s sad is that there have been so many other attacks, that children/teens don’t even learn about this one in school. I took my niece to the memorial and museum when she was a senior in high school because she had never even heard of the OKC bombing. If you’re ever passing through this part of Middle America, you should definitely make a point to stop.